While riding (on a scooter) to a nearby masjid with one of my brothers-in-law, I felt something flew straight into my eye despite the fact that I was wearing my glasses at the time.  I was unable to flush it out while on the bike, and I thought that, like most eye gunk, it would just migrate to the corner of my eye for easy extraction.

As it turned out, I was unable to get it to move, and after returning home, I could still feel it.  I looked in the mirror and was able to spot, rather clearly, a small black speck in my right eye right between my iris and the surrounding white area.  I flushed my eye out with water, and, alhamdulillaah, I was able to get it out.  Surprisingly, it stayed on my finger long enough for me to show it to my wife, brother-in-law, and finally, to take a few pictures. 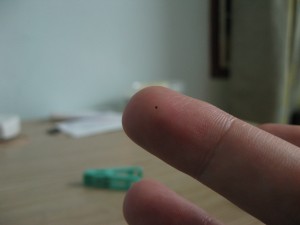 UFO extracted from my eye

The object is roughly spherical in shape (though it’s hard to tell from the picture), and if I had to guess, I would say it was an insect of some kind, or part of one, given it’s semi-shiny appearance and the few features I was able to make out.

There are too many amazing things about this.  For starters, just the sheer size of the thing and how much trouble it was causing me in my eye.  Also, the fact that it was so easily flushed-out.  And, alhamdulillaah, my eye, though red immediately after I extracted the speck, was fully healed as if nothing happened within hours (and possibly minutes).

Alhamdulillaah for the blessing of sight and for everything else that we take for granted.  How easily could it have been that this would have turned out worse?  Alhamdulillaah ʿala kulli shayʾ.